The system, located in the Quebrada de Ramón de La Reina, was designed by professors and students of Electrical Engineering UC.

Currently, the monitoring system operates with 18 stations that measure temperature, humidity and rainfall in the foothills to determine the risk of floods according to the height of the isotherm 0, the altitude above which it snows and below which it rains.

“This information, together with the weather forecast, gives a warning about three days in advance regarding the possibility of a significant flood in this creek,” explained Christian Oberli, one of the UC engineers who leads the project.

The wireless network specialist added that the stations were designed to operate under extreme weather conditions. This feature, in addition to the easy transfer of the equipment, allows the system to technologically cover the areas with the highest risk of alluvium in Chile.

“In these four years of the system’s operation, we value the support received from Conicyt and the Mountain Range Parks Association (Asociación Parques Cordillera), which made possible the contribution of this initiative created at the UC laboratories,” said the UC engineer.

After the positive results in Chile, the system was exported to Italy. The Mediterranean country is exploring its application to monitoring hydroelectric generation flows.

To date, there are 12 stations that monitor the basins of the Italian rivers Serchio and Piave, optimizing the operations of plants in the area and improving the management of the reservoirs. 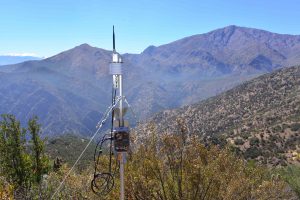 The technology exported to the European country emerged from a joint project of ENEL Chile and ENEL Italy after testing the scope of the prevention system in the foothills of La Reina.

The data collected by the stations, as in the Quebrada de Ramón, are reported online to a computer system that can be accessed by those who operate the power stations to assess and forecast floods.

In addition to the level of water, humidity, temperature and rainfall, the devices designed at the UC have been equipped with cameras to capture images on demand, which helps to identify eventual problems, such as the obstruction of intakes.

Engineers have also integrated solar radiation intensity sensors and sun position sensors into the equipment. In the case of places with snow, their use will improve melt estimates and subsequent increases in flows in a basin.

These devices are being used by Aguas Andinas to study the glacial melting that feeds the Maipo River Basin.