With the use of Big Data and Machine Learning, this technological solution improves energy predictions for photovoltaic power plants by 60% in adverse weather conditions.

The Universidad Católica (UC) Civil Electrical Engineering Graduate, Constanza Levicán, led the first tests of an innovative program created to predict in advance the country’s production of solar energy of the country under rainy weather conditions.

The technology, aptly named Suncast, improves energy predictions for photovoltaic sources by 60% in adverse weather conditions. This is thanks to the use of Big Data and Machine Learning, which crosses historical information of the plants with meteorological data. 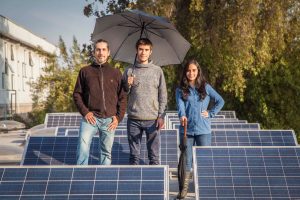 With the use of Big Data and Machine Learning, this technological solution improves energy predictions for photovoltaic power plants by 60% in adverse weather conditions.

“During rainy days, the performance of solar energy drops considerably, by more than 30%. Today the forecasts used for their optimization are low in quality and have a high margin of error, thus impacting the future of these renewable alternatives”, said Constanza Levicán.

To ensure further development in Chile, the young Chilean and a team of researchers in Computer Science, Christian Pieringer and Bruno Marín, conducted the first tests of the predictive model in the pilot plants of El Águila I power plant in Engie Energía Chile, located in the Arica and Parinacota region.

“The results obtained demonstrate Suncast’s high quality performance and its ability to adjust to real operating conditions, even including episodes of intense rain, such as those recorded during the last altiplano winter in the northern zone”, said Levicán.

The UC researcher also noted that the technological solution allowed for the prediction of climatic phenomena, through a complete report, thereby helping guarantee the fulfillment of the plants’ required supply and assuring a stable operation rhythm.

“The tests also indicated the need to improve the coordination of maintenance operation activities with the prediction model. For example, one can plan for the full cleaning of the panels on high cloudy days, when the generation and distribution of solar energy is low”, she added.

Constanza Levicán recognized the value of the collaboration with Engie Laborelec Chile in obtaining the results, as well as the support received by the center’s solar expert, Elías Urrejola, in the validation of the Suncast predictive model.

A year and a half after its launch, it is hoped that this Chilean innovation will become an international benchmark. The idea is to help other countries, such as in Mexico, Brazil, United States and Australia, to optimize the operation of their solar plants.

The technological solution has received several recognitions since its creation. It was one of the outstanding projects in the Big Data Entel Marathon, a finalist of the Singularity University Summit and winner of “Sun Fever”, an event organized by SERC Chile, Ayllu Solar and the BHP Billiton Foundation.

The El Águila I photovoltaic power plant in Engie Energía Chile has seven experimental pilots to measure the performance of each technology under the extreme conditions of the Chilean desert.

The laboratory, located in the Arica desert, is one of the best places in the world to develop solar projects, allowing researchers to test different predictive models during the months of January and February.

Chile has the highest levels of solar radiation worldwide, with some northern points reaching 3,000 KWh per m² per year.