Rediscovering the nutritional power of chilean anchovy with 12 new recipes

From a “Pulmay” to raw anchovy sopaipillas, these are just some of the preparations created by engineers and chefs transforming this product into the protagonist of the food of the future. 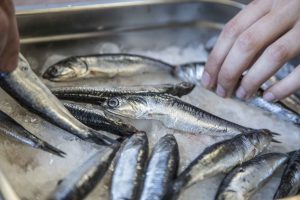 The project is the result of over a year of work on the gastronomic use of anchovy.

The Gastronomic Engineering Unit of Universidad Católica (UC) has developed 12 innovative recipes with Chilean anchovy, in a quest to rediscover the great nutritional power of this marine resource, otherwise commonly used in salmon food production.

The preparations are part of the publication “Chilean anchovy on the table”, an initiative led by the UC Engineering professor and National Awardee of Applied and Technological Sciences (2008), José Miguel Aguilera, along with the researchers and chefs Maike Siegel and Rodrigo Orozco.

The project is the result of over a year of work on the gastronomic use of anchovy, which hopes to serve as an inspiration to chefs across the country in the development of  tasty uses for this fish, with a special focus on children’s menus, considering its high nutritional quality.

Chilean anchovy is the second-most fished marine resource after salmon, and a good source of proteins, minerals, vitamins and polyunsaturated fatty acids, all components of Omega 3. The latter favors cardiovascular health and the development of the central nervous system of the people.

Despite its multiple benefits, anchovy has not yet been commercialized in any of the country’s fishing markets. This is because 99% of the 337 thousand tons captured annually, are used in the preparation of food for the aquaculture industry and as nutritional supplements for human and animal consumption.

For UC researchers, the potential of Chilean anchovy for human consumption can be estimated using the case of Spain as an example, where its consumption per capita averages 1.12 kilograms a year, thanks to its conservation methods. . Here this resource is considered a gastronomic luxury. This is in stark contrast to the situation in Chile. According to the United Nations Food and Agriculture Organization, better known as FAO, fish consumption per person is estimated at 7.5 kilograms per year, while the world average is more than double (19.7).

Also, the overall fish consumption is far below other animal proteins, such as chicken, beef and pork. This is despite the country’s potential given its more than eight thousand kilometers of coastline.

The anchovy is a pelagic fish that lives in the Pacific Ocean, in the Chilean and Peruvian seas, in large schools. It plays a key role in the Humboldt Current ecosystem, because many fish, mammals and seabirds depend on this species as a food source.

One of the factors threatening this resource as a safe and appetizing food, is the rapid enzymatic degradation that occurs after capture, which damages the fish tissue. To avoid this, there are different methods of preparation, such as salt preservation, drying and smoking.

Taking advantage of these processes, the UC Gastronomic Engineering Unit has combined the talents of engineers and chefs to provide a “pinch of science” to anchovy preparations. The idea of ​​the authors is to transform this product into a protagonist of the food of the future.