The High-Five project seeks to scale this type of technology up across the country for the benefit of those who have suffered an amputation.

Three engineers from Universidad Católica (UC) launched the first Chilean open-source robotic prosthesis, to contribute to the design, manufacture and assembly of more innovative prototypes for people with disabilities.

The project seeks to scale this type of technology up to return the sensation and functionality of the upper extremities to those who have suffered some form of amputation.

“With this open-source initiative, we hope to share with other institutions and researchers all the knowledge acquired in the university to create more innovative robotic prostheses. This considers the electrical, computational and mechanical part”, said Luis Cubillos, one of its creators. 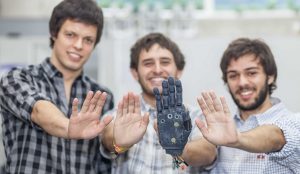 The High-Five project seeks to scale this type of technology up across the country for the benefit of those who have suffered an amputation..

The UC engineer explained that the platform explains the operation of the sensors, which transform the muscular movements of the arm into electrical impulses, which are measured by software and then programmed so that the person can properly maneuver the prosthesis.

“For example, the palm of one of the shared devices has a system that allows the user to feel again when shaking one’s hand during greeting. In the tests performed, this function has the power to change a patient’s life”, added Cubillos.

Also, the open source project launched by the engineers shows the multiple applications of 3D printing to create economical robotic prototypes for people with disabilities, unlike traditional orthopedic devices.

Cubillos, with Vicente Opaso and Hannes Hase, have been working together since 2015 on this type of technologies. Since then, they have received significant recognition from the Research, Innovation and Entrepreneurship programs of UC Engineering and Brain Chile, which are supported by Engineering 2030 of Corfo and Jump Chile.

According to figures from the National Disability Service, 13% of the Chilean population, equivalent to more than two million people, has some type of physical disability.

In software, the free code of a program has become common practice. The same has occurred in electronics, where today it is easier to access standardized parts and microcontrollers.

On hardware, there are still countless open robotics projects to share. But thanks to the growing popularity of 3D prototyping technologies, users can now download designs for components, print and assemble them.

One of the globally emerging open hardware initiatives has been the development of robotic prostheses for people with disabilities, especially for children. Currently, there are several American and European organizations that have freely shared their designs within the network.