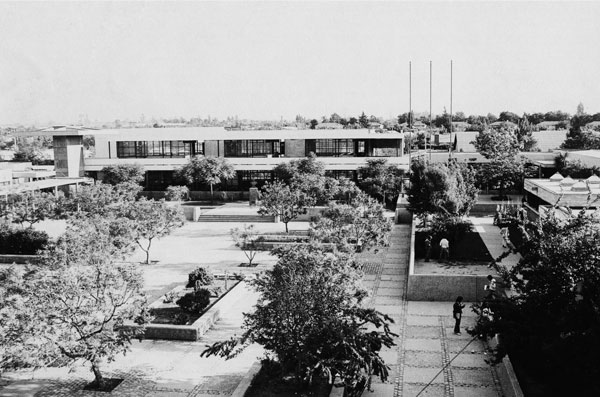 To speak about the beginnings of the Escuela de Ingeniería is to speak of the foundation of the university itself. In 1892 the Universidad Católica four years after its foundation, began offering the course of Ingeniería Civil or Civil Engineering with some 30 students, where architecture and engineering complemented each other. Five years later the first two civil engineers had graduated: Germán Holtheuer and Jorge Urzúa, who were the first certified graduates of the UC.

In 1900 the Archbishop of Santiago Monsignor Mariano Casanova, issued the decree creating the Facultad de Ciencias Físicas y Matemáticas, (Math and Sciences Faculty) which harbored the course of Civil Engineering (at the time, course and school were synonymous). Three years later these degrees began to be recognized by European schools and universities. The first accreditation came from the University of Louvain, Belgium whilst the Chilean State recognized this Civil Engineering degree granted by the Universidad Católica during the presidential period of Carlos Ibáñez del Campo in 1928.

The next three decades that followed after the foundation of the school, were of consolidation and growth. The amount of teachers and students increased, independent bodies were created, laboratories were developed and service activities were started up.

Since it was founded, the School of Engineering has strongly emphasized experimental and practical teaching; the maximum expression of this is seen in the teaching labs. There are several notable labs, such as the Hydraulics lab, created in 1926, which was the first of its type in South America together with the Instituto de Investigaciones de Materiales (1938), or Materials Research, from which nine years later stemmed the Dirección de Investigaciones Científicas y Tecnológicas DICTUC (Scientific and Technological Research) and whose activity has been a significant contribution to the development of the country through its partnerships with companies, industries and public institutions.

The Development Plan of engineering education began in the 1960´s during the deanship of Raúl Deves, as part of the project to modernize the faculty. This resulted in the modernization of the school which became an advanced university center in accordance with the requirements of technological advances and the country’s needs.

During this time other changes and improvements were initiated, such as the modifications to the curriculum program which positioned the school as a pioneer in the incorporation of a flexible semester-long program, the improvement plan to perfect teachers for the formation of faculty members of excellence, and one of the most important landmarks being the construction of the San Joaquín campus. During the deanship of Raúl Deves the School of Engineering adopted as an organizational structure one of departments, which had to develop teaching and investigative functions in different disciplines.

In 1974, following the university reform as well as a series of restructurings of the academic units, the Facultad de Ingeniería, (Engineering Faculty) was created which grouped together the Escuela de Ingeniería, Construcción Civil, and Servicio de Ciencias de la Computación (SECICO) and DICTUC.

During the 1980´s and with the purpose of achieving a leadership position, the school imposed upon itself the objective of achieving a higher academic standard of its post graduate faculty members as well as attracting more students as well as higher level students; this has been successful up to the present. In addition, post graduate programs began to be developed. In 1983 the Magíster en Ciencias de la Ingeniería, or Engineering Master of Science program was created, in 1993 the Doctorado en Ciencias de la Ingeniería or Doctorate in Engineering Sciences was created, in 1992 the Dirección de Investigación y Postgrado or Office of Investigation and Post Graduate (which was key for the development of research in the school), and in 2003 the Magíster en Ingeniería or Master in Engineering Program was created.

In 2009, in tune with the worldwide trend of having more efficient curriculums, a new curriculum is implemented based upon competitions. In 2013, this was complemented with a curricular structure with two formative cycles, the first leading to obtaining a Licenciatura en Ciencias de la Ingeniería or Bachelor’s degree, and the second leading to obtaining the professional title.

The purpose of this new curricular structure, driven by the Plan de Desarrollo Estratégico 2010-2015 or Strategic Development Plan 20110-2015 by the dean Juan Carlos de la Llera was to certify the education of the Ingeniería UC (Engineering UC) with that of the best schools in the world, facilitate the internalization of the students in addition to coordinate this together with post graduate studies, as well as to encourage interdisciplinary studies, entrepreneurship and innovation.

In 2014 the Escuela de Ingeniería (Engineering School) was awarded first place in the contest “Nueva Ingeniería para el 2030” or New Engineering for 2030 sponsored by CORFO (Corporation for the Development of Production) in order to support the transformation of the engineering schools of the country in world class schools, indicating a new milestone in the development of Ingeniería UC. The School presented the project “The Clover” 2030 engineering strategy: an engine to surf the waves for Chile´s development” together with the Universidad Técnica Federico Santa María which led to the formation of the consortium UC- USM. This project later became the continuation and the empowerment of the processes of change which began with the Plan de Desarrollo Estratégico 2010-2015 or Strategic Development Plan 2010-2015.

Within the framework of this same program and thanks to an agreement with UC Berkeley, through the Sutardja Center for Entrepreneurship & Technology, in 2015 the first international offices of Engineering UC are inaugurated overseas in Silicon Valley, San Francisco, with the intent in the near future to extend the scope of the School to other continents like Europe and Asia.

The year 2016 was the second year of the execution of the 2030 Engineering Project which meant advancing in the consolidation of a great number of initiatives driven within the framework of this program, such as international research projects, alliances with prestigious international universities, the development of areas of engineering education, offering courses online, the development of initiatives of innovation and entrepreneurship such as Brain Chile, Bridge Silicon Valley and Boston and the progress of new infrastructure, among others.